ITHACA CALENDAR CLOCK COMPANY, INC. was formed back in October of 1981 by Michael Porter, Joel Warren and Ken Peterson.  We tried to reproduce some of the more common Ithaca clock models. Joel and Ken were in charge of the cabinet shop, which produced not only the clock cases but also made custom furniture. I was in charge of producing the inside movements, assembling the bezels and dials and doing general clock repair. Producing a manufactured product from scratch, assembling , marketing , and shipping it was a task that none of us really realized how mammoth of a job this would be During this time we manufactured approximately 500 clocks in total. Most were the Farmers, Office Clock, and the Library.  We did less than a dozen of the Kildare’s and Belgrade’s. We did a run of 8  #4 Office clocks made out of solid rosewood.

In 1983 Joel left and  Mike & Ken  took over the clock company and ran it until Ken left to go back to college in 1985.  In 1986 I moved it to 311 Third Street in Ithaca and opened up a retail location where the Ithaca Clocks and also Howard-Miller clocks were sold and repair of all clocks were done. The business was then moved again 1987 to Freeville N.Y. where it stayed until it was moved to Newfield it’s present location in 2005.

We now just specialize in the refurbishing of the original Ithaca Clocks from the 1800’s and building a few new ones to order. 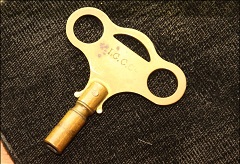